The following is a guest post from Deborah O’Ferry, an Australian women’s fiction author and copy writer.

International Women’s Day is an important day internationally.  It looks at the steps still to be taken for equality. But I feel that in Australia, International Women’s Day is too often celebrated with a cup of tea after a free yoga class. It’s the day that the sought-after public microphone is handed over to talk about the gaps that still exist for gender equality, and we shouldn’t be wasting that opportunity to hand out tea.

I’m incredibly proud to live in a country that has come so far in supporting women, but we can do better. Intersectional feminism looks at the overlapping factors that create an individual’s experience of feminism. But one of the many gaps I feel passionate about, and needs propping up, is actually the male experience, and looking at inequalities for men. In particular, inequalities for fathers.

As women make progress, complementary changes are needed to support men as well, to complete the circle.

I never knew the gaps between genders more than when I became a parent. When my role became so domesticated. When people would ask me how the kids were, and my husband how he was going at work.  My self and my career became unseen, and I’d often be told how lucky I was to be able to be at home. Which I was. But for me to be at home, my husband’s role as a father appeared to be seen as financial. And to make those finances, my husband had to not be at home.  Our roles became polarised.

Within partnerships, the beauty and ugly truths of parenthood can often be experienced solo for women. Yet, socially, women are offered a world of Motherhood which is quite different to Fatherhood. There are networks, courses, Mothers Groups, social media pages; filled with professionals and other mums, cheering each other on and offering wisdoms, information, empathy and friendship.

But from day one, a different tone is set for Fatherhood, and they are often on the back foot.

When my husband and I welcomed our daughter into the world, over tears (that only one of us is usually welcome to shed), we fell in love. We had our family, and we could have watched her all night. But, at 8pm, we farewelled each other in the maternity ward, where I was left to work out that first nappy alone and he was sent away from his family.

Day three, he was at work —business as usual. With no permissions to fall apart.

Those early days are the foundations that can set our families up for the years ahead, but they can also set us up to fail— as a family, as a partnership, and as an attitude on roles and expectations.

There are so many fights to be fought for equality, and our position in Australia is exceptionally strong, but change needs to support men as well. There needs more movement in policies and culture socially, medically (family health care) and within workplaces, to catch up to women’s progress, to allow men to support the women in their lives and feel connected to their own families. Looking at feminism with a parental lens, mums of Australia can’t be CEO’s, be financially independent or go out and join a soccer team, if they are not supported and given the room to make those choices. But men, as parents, can’t support women if they are not given the empathy, flexibility or the information to, either.

Deborah O’Ferry is an Australian women’s fiction author and copy writer based on the outskirts of Sydney. She has also worked in the community development sector for many years and is a passionate advocate for women, parents, and mental health. Her writing has been featured on various websites including Kidspot and Babyology. Deborah’s first women’s fiction novel, 500 Miles, has received exceptional reader reviews over its first year of release, and she is working on her second novel.

Image description: Headshot of Deborah from the waist up smiling and looking straight at teh camera. She wears a multi-coloured wrap blouse with short sleeves and has long, curly hair. 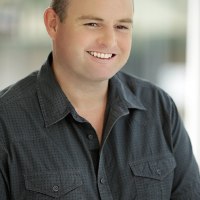 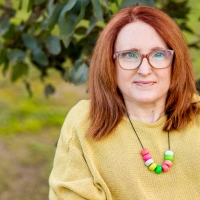